I think we all can remember the whitewashed version of history all of us were taught in school about the Emancipation Proclamation.

That with the pen of almighty power, Abraham Lincoln said “I think not, sirs and gentlewomen” to the southern states and signed a decree stating that all slaves were free as of January 1, 1963. A big “screw you!” to the Confederacy as we all know.

Now, this of course only meant the states in rebellion with the Union as this was the time of the Civil War. It didn’t free the 4 million slaves that were held in the border states between the North and South that were still on the side of the Union.

But it was a start.

Then our teachers told us everything was smooth sailing from there. Sure there was still racism, lynching and cold-blooded murders of black people but they were F R E E. No longer slaves. Living their best lives. Could hop on a train and move up North. Start a family. Move on.

Time to get educated folks.

It wouldn’t be until June 19, 1865, that all slaves were free in Galveston, Texas. Hence the name “Juneteenth.”

And I want you to really understand this.

Two YEARS people. TWO YEARS after the proclamation was signed into order did they get there.

And still, then MONTHS after the 13th amendment was passed by Congress on January 31, 1865.

So even if instantly slaves were freed by the signing of the proclamation, others were still held and sold as slaves for years to come.

When the army rode into the final town in Texas, they made this formal announcement:

“The people of Texas are informed that, in accordance with a proclamation from the Executive of the United States, all slaves are free.”

Which is so important because that officially meant you couldn’t play it off like you had no idea as a slave owner. That you would be punished by law if you were caught having any part of the slave trade.

From here the army would take official control of the state and ensure that every slave was freed accordingly.

June 19, 1865, is the true day that slavery ended in the United States. That’s why it’s so important.

This Calls For A Thought Bubble

I hope that events like Juneteenth make you realize how whitewashed our history is. There are entire parts of history we don’t learn about, that aren’t anywhere in the history books. I’ll be writing about another event in the next coming days.

But I would encourage you to take this time to educate yourselves and others. Identify the lies and the truth and the parts that are just plain missing. Hypothesize on why that is and why African American History, Mexican-American History, basically any other history given in our textbooks, is so whitewashed.

View all posts by jramick 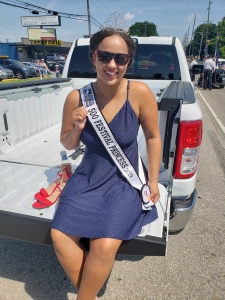 Hello and welcome to my blog!

I’m Justice Amick, the author of these sometimes crazy posts.

As a current graduate student, I spend my time reading, writing and working. I plan on one day writing a book, traveling the world and doing a bunch of other big things I haven’t quite figured out yet.

On the blog you’ll find all sorts of topics that I write about, kind of like a hodgepoge — hence the name!

I hope you like what Vhodgepodge has to offer – thanks for stopping by!